For two years, I lived in a duplex with my mother and two sisters on Maryanne Drive in Santa Clara, California. We moved there during my very last month of first grade, when I was six years old. Next door, in the attached unit, lived a family of three. Oddly, they all had similar names. The dad was named Don Dots; the mom was named Donna Dots; and the little boy was named Donny Dots. Even though Donny Dots was about two years younger than me, we still became friends, of sorts. Donna Dots would not allow Donny Dots to venture farther than our shared yard, so we would pal around outside within this prescribed boundary or play together inside.

He would sit cross-legged on the floor, hunching over a bowl of Fruit Loops or Sugar Pops in his lap, with head raised up TV-ward, eyes glued to the screen, and he would ... slurp. He made long slurping sounds that can only be produced by a little boy entranced in the delightful wonderment of cartoon-watching, while, inattentively, funneling milk directly from cereal bowl to lips, after having long-finished the bits and pieces of Fruit Loops or Sugar Pops floating in the swimming-pool of milk. I would never say anything to him, only glare from my side vantage point and study him. I found myself repulsed by these slurping noises. Yet, I felt sorry for him. The fact that he was unaware of my observing him made him — to me — appear vulnerable, and that vulnerability made me feel uncomfortable about being so critical of him.

The second trait was manipulation. I was manipulative. I used pseudo-logic on Donny Dots. One time, he had found a dime and I wanted that dime. So, I presented to him the concept that not having a dime would be more beneficial to him than having a dime. I would be, in a sense, unburdening him from this wretched dime. Therefore, he should hand over said dime to me, immediately. He yielded to my demand and I felt victorious.

The third trait was jealousy. The Dots family had bought a brand new Chevy station wagon with wooden side-paneling. That made me feel jealous. So, one evening, I stole out of the duplex with my house key, and ran the key all along the driver’s side, leaving a long thin scratch on the Dots’ brand new Chevy station wagon with wooden side-paneling. To my knowledge, I conceived this idea all by myself. No one had taught me this skill. Years later, I learned that this retaliatory act was called, “keying a car.” I recognized myself and felt ashamed. But back then, when I was seven, I had felt no remorse.

The forth trait was craftiness. For some reason, I always wanted Donny Dots to get into trouble with his mom. So, one morning, I saw Donna Dots hanging freshly washed laundry up on the clothesline, outside in our shared yard. I spotted a pair of Donny Dots’ underpants hanging there to dry, and then, I watched his mom disappear back inside through her backdoor. I carefully figured out that if Donny Dots were to poop in his underpants, he would surely get into trouble.

So, I hatched a brilliant plan. I scooped up some mud into my little fist and crafted, what I thought, was an authentically shaped piece of poop. Next, quite gingerly, I balanced upon a lawn chair that I had pulled up under the clothesline. It was strategically placed directly under Donny Dots’ underpants. Barefooted and teetering, I, conscientiously, reached up and delicately placed the lump of mud into the crotch of Donny Dots’ underpants. Then, I swiftly ran inside and peeked out the window, anticipating Donna Dots coming out, discovering that her son had pooped in his underpants (that she had just laboriously washed), and Donny Dots would receive some type of very deserving punishment.

But, to my dismay, that is not what happened. Donna Dots came out, saw the “poop,” ripped the soiled underpants right out from underneath its clothespins, and shot an angry scowl toward our backdoor. I was truly perplexed. She had clearly seen the “poop.” Why did not Donny Dots get into trouble? A couple of decades later, while reflecting on this incident, I did figure the whole thing out.

Yes, I had been a very naughty little girl while living in that duplex with my mother and two sisters on Maryanne Drive in Santa Clara, California — but, I blame it all on Donny Dots.

Yard — an area of land in front of or behind a house
Trait — a quality, good or bad, in someone’s character
Per se — ’by itself’ or ’in itself’
Slurp — to drink a liquid noisily
Unaware — not understanding or realizing something:
Vulnerable — able to be easily physically, emotionally, or mentally hurt
Dime — an American or Canadian coin that has the value of ten cents
Scratch — to cut or damage a surface or your skin slightly
Craftiness — behaviour that is clever, and sometimes also slightly dishonest
Mud — wet, sticky earth 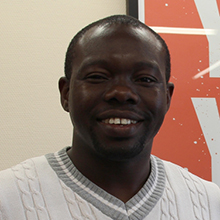